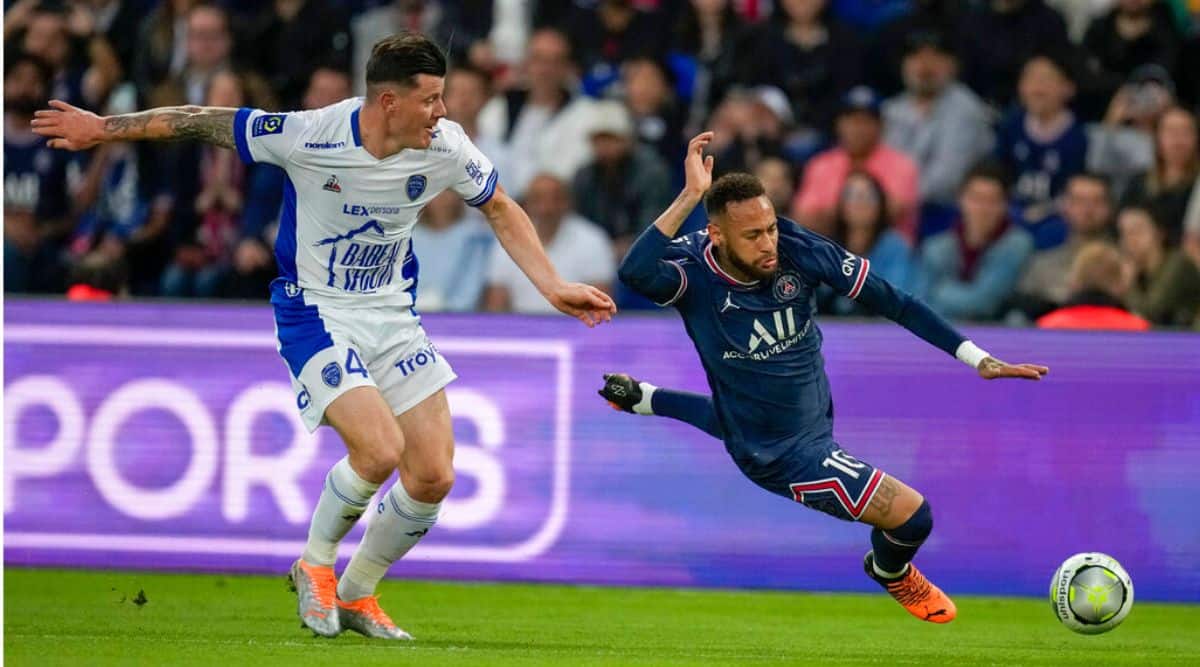 French champion Paris Saint-Germain threw away a 2-0 lead to draw 2-2 with 15th-place Troyes in another disappointing performance on Sunday.

PSG was in control of the league game after 25 minutes with goals from central defender Marquinhos, after Angel Di Maria’s pinpoint cross, and forward Neymar, who scored from the penalty spot after Kylian Mbappe was fouled.

But poor defending cost PSG again, as it has several times this season, and Canada forward Ike Ugbo pulled one back in the 30th following a clumsy mistake by defender Nuno Mendes.

Midfielder Florian Tardieu stepped up to beat goalkeeper Keylor Navas with a neat Panenka-style penalty for modest Troyes, which was promoted last season.

PSG’s Marquinhos, right, celebrates with his teammates after he scored his side’s first goal during the French League One soccer match between Paris Saint Germain and Troyes at the Parc des Princes stadium in Paris, Sunday, May 8, 2022. (AP Photo/Christophe Ena)

Neymar scored again in the 57th, but his goal was ruled out after a video replay showed Mbappe pushing a Troyes player in the back before Neymar received the ball.

Earlier, Marseille showed it can cope without injured playmaker Dimitri Payet, winning 3-0 at Lorient and restoring its three-point lead in second place and the automatic Champions League spot.

Payet is out for the rest of the campaign with a torn calf muscle and striker Arkadiusz Milik sat out with a minor hip injury.

Marseille scored through striker Bamba Dieng in the 39th minute, midfielder Matteo Guendouzi shortly after halftime and left winger Gerson in the 67th.

Monaco is in third place and three points behind Marseille with two games left. Rennes can move level with Monaco and into third on goal difference if it beats French Cup winner Nantes on Wednesday.

Farid Boulaya scored a last-minute winner as Metz improved its slim chances of avoiding relegation with a 3-2 home win against Lyon, moving off the bottom into 19th place.

Lyon finished the game with 10 players after midfielder Thiago Mendes was sent off midway through the second half.

Captain Vincent Pajot and Didier Lamkel Ze put Metz 2-0 ahead before striker Moussa Dembele replied just before the break and equalized in the 85th minute with his 19th league goal in just 28 games this season.

Bordeaux replaced Metz in last place after losing 4-1 at Angers and sliding closer to relegation. Bordeaux has conceded a league-high 89 goals.

Lens moved into seventh place after winning 2-1 at Reims, with striker Florian Sotoca grabbing his second goal of the game in injury time.

Clermont moved into 16th and closer to safety by beating Montpellier 2-1 at home, with striker Mohamed Bayo scoring the decisive goal from the penalty spot in the 69th.

Nantes and Nice are both playing games on Wednesday because they faced each other in the French Cup final on Saturday, with Nantes winning 1-0 for its first trophy in 21 years. Nice hosts struggling Saint-Etienne.