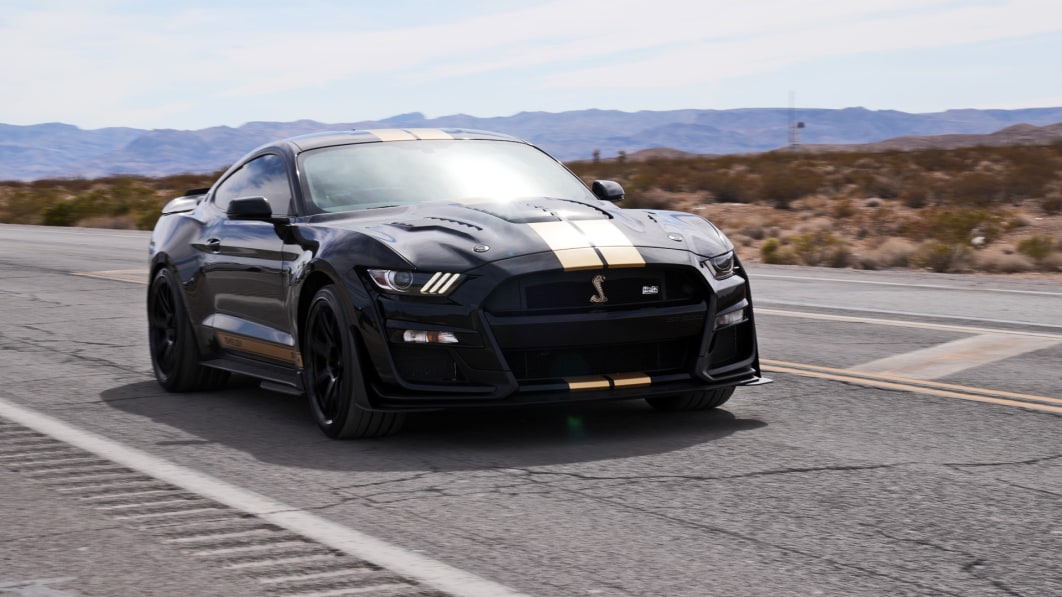 
When it comes to American muscle you don’t get much more apple pie than Shelby American and Hertz. Once again, the two companies are teaming up to offer travelers across the United States access to a triad of new Mustang Shelby muscle cars with as much as 900-plus horsepower, reinvigorating their longtime Rent-a-Racer program this summer.  But, are the $399-per-day price tag and additional restrictions worth the price tag? Purely for research, we hopped a quick flight to Las Vegas and the Shelby Museum to get behind the wheel of the convertible GT-H and the monstrous GT500-H on a straight highway run out to Seven Magic Mountains and back to gather more data.

The GT-H comes in convertible and coupe form and starts with your standard Shelby GT, which is based on the Mustang GT Premium with the 5.0L V8 that puts out around 450 horsepower. Hertz and Shelby don’t have specific horsepower details yet for either vehicle, but when the cars hit Hertz airport locations around the country the company will have those numbers buttoned up. Both the GT-H and the 900-plus-horsepower GT500-H get special Shelby bits added for both looks and performance including parts like Borla cat-back performance exhausts, a staggered-width wheel kit, 20-inch aluminum wheels with all-weather Michelin tires, and a Shelby-designed deep-draw hood, upper grille, fascia winglets and taillight panel. The convertibles get a special light bar, and of course, both the coupe and convertible get those characteristic Hertz-gold racing stripes and Shelby serial numbers that will be added to the Shelby registry.

That’s because Hertz and Shelby both hope that these vehicles will continue to fetch high prices on the secondary market after their time in the hands of renters comes to an end around the end of 2022. The 1966 versions, the ones that marked the first advent of the Rent-a-Racer/Hertz-Shelby tie-up, now fetch nearly $200,000 at auction. The 2006, 2007, and 2016 models also go for a premium price on the secondary market according to both Shelby and Hertz executives. Both Shelby and Hertz say that giving normal people access to these powerful vehicles will “surprise and delight,” and both companies talked at length about the benefits in sales and rentals that they see as a result of the program. 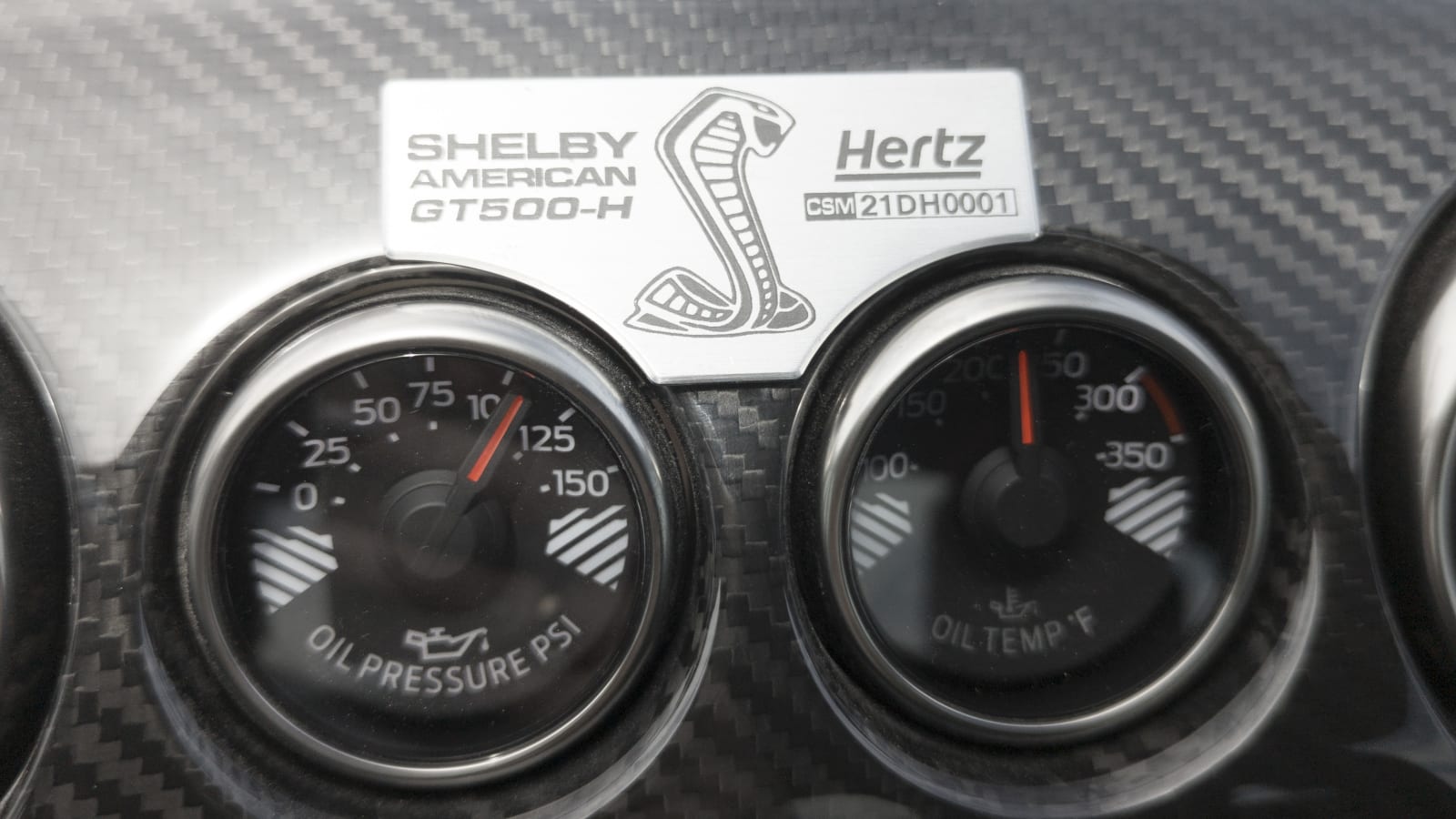 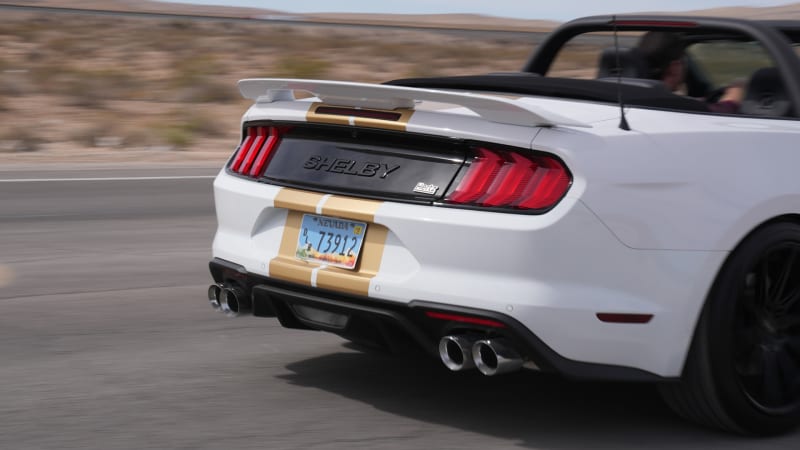 “The Hertz deal in 2006 saved Shelby,” Patterson said in an interview with Autoblog. “The company had been badly financially managed and the Hertz deal pulled it through.”

Both Shelby American and Hertz are no strangers to financial and business problems. While Shelby isn’t in the same position it was in the early 2000s, the company did say it had some production slowdowns as a result of pandemic shortages, especially since it relies on products from Ford. According to Shelby American, it ships around 1,200 cars a year to customers. Hertz, on the other hand, just came through bankruptcy and is working through a rather messy legal battle after accusing thousands of renters of stealing Hertz cars.

The tie-up brings the two companies together for a three-year deal, and more cars are coming. The Mustang Shelby GT-H and the much more powerful Mustang Shelby GT500-H will be the first ones available to rent this summer. It’s possible that one of those additional new vehicles may be a Shelby F-150 and/or a Bronco, but no one at either company would confirm that. Shelby says that the company’s production of Mustangs and F-150s largely mirrors Ford’s, and it has considered doing a Shelby Bronco, but the project is still in the air. 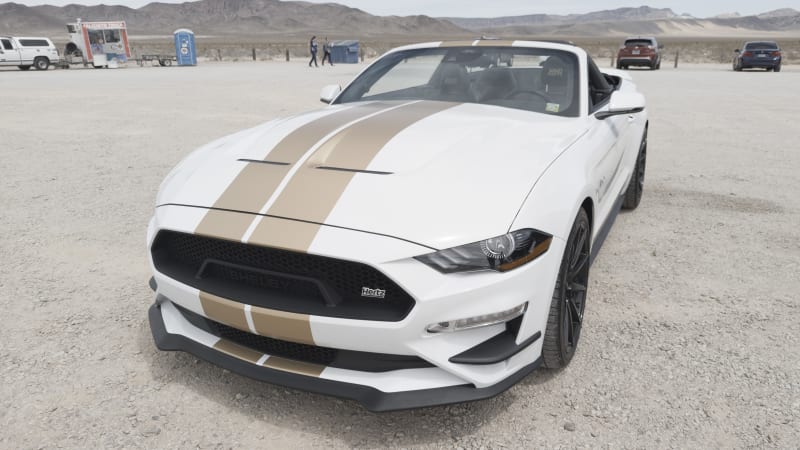 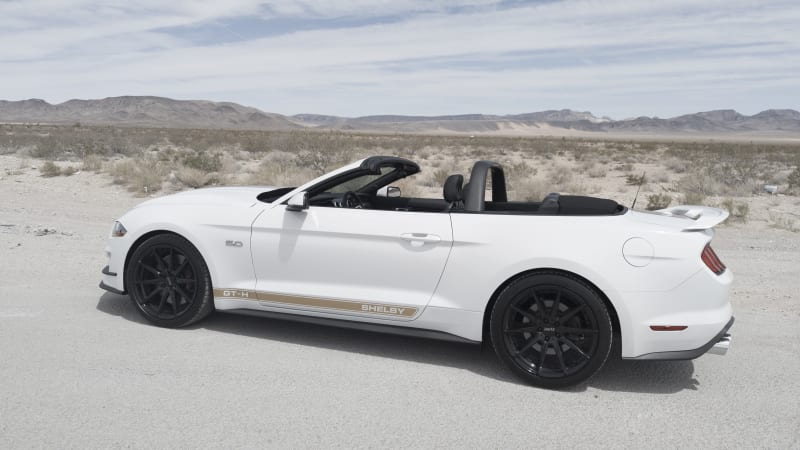 We first hit the road in the GT-H convertible. It offers comfortable cruising and plenty of power to pass pokey drivers on the highway. The sonorous exhaust note rings through your body as you squeeze the accelerator and the bramble and desert brush fade into a blur. Even at highway speeds, there is still plenty of runway to easily push the car to go quicker – especially in a straight line. Sadly, the road to the Instagram-famous Seven Magic Mountains landmark is as straight as an arrow, and given the very short time allocated for the drives, there was no opportunity to really test anything beyond straight-line speed in the GT-H.

At the stopover, we stopped to snap some photos, do some car-to-car shots, and swap vehicles.  After all, the GT500-H is the monster that we most want to drive, and what most people are going to aspire to rent. There will be only 25 of these cars made – and they’ll fetch a hefty daily price tag: $399 per day with a 70-mile daily limit. Go over that limit and you’ll be charged with a $0.75-per-mile overage. You also won’t be able to rent these for one-way trips and like all rentals, you’ll need to be at least 25 with a valid license.

Hertz execs say that there will be other constraints to help keep the cars from being driven out of the United States, although when pressed they didn’t share further details. Laura Smith, the EVP of Global Sales, Marketing, and Customer Experience at Hertz wouldn’t confirm if the vehicles would have active tracking devices in the Shelby Mustangs, either, simply saying that Hertz wants to be sure that customers are safe in any vehicle they rent. Most rental fleets do use some limited GPS tracking to locate vehicles when there’s a breakdown or emergency, though they don’t actively track things like speed. In the GT500-H, that would be a real factor. 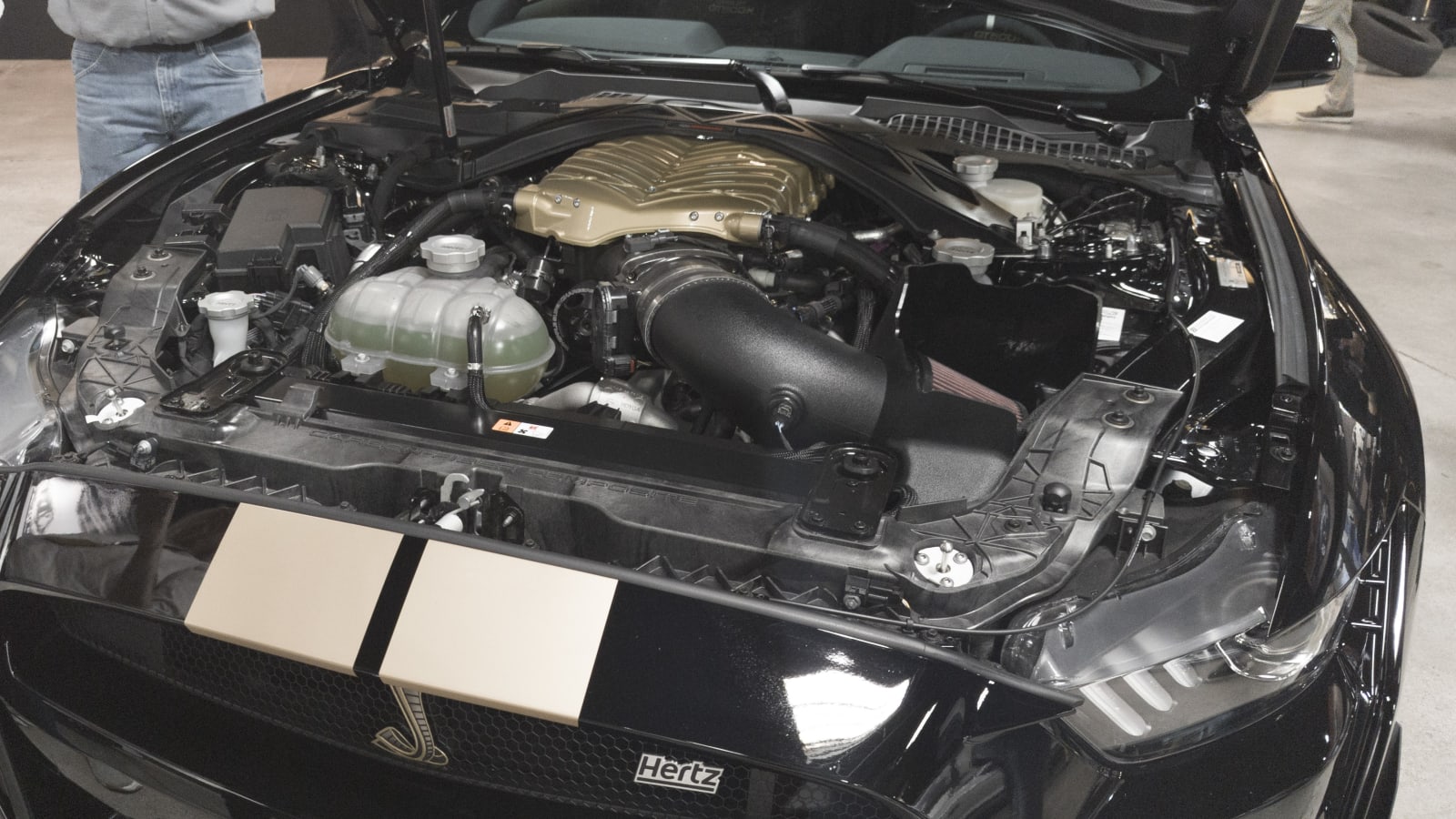 Underneath its black and gold paint, the Shelby Mustang GT500-H is a lot like the Shelby Mustang GT500KR – a 900-plus horsepower, rear-wheel-drive beast, at least on paper. Based on the GT500, GT500-H gets the 5.2-liter supercharged V8 with a massive, gold, 3.8-liter Whipple supercharger, which is similar to what the GT500KR also gets (minus the gold paint). It also gets new half-shafts, a Borla cat-back exhaust, staggered-width 20-inch aluminum monoblock wheels shod in Michelin Pilot Sport 4 performance tires, Brembo brakes painted gold and emblazoned with the Hertz logo, and a number of special Hertz and Shelby visual touches around the car. The GT500-H also gets the same dry carbon-fiber hood with functional scoop and vents from the KR. According to Patterson, the suspension has been specially tuned to offer a balance of comfort and sportiness. Truthfully, all of that performance gear adds up to far more than many well-heeled renters can handle or even know what to do with.

On the road, the supercharger whine is an invitation to push the accelerator just a little bit further and it will be pleasing to muscle car aficionados. With an estimated 900-plus horsepower, it goes without saying that you’re never left wanting for power, even at highway speeds. Zero to 60 mph is obviously quick, and 70 mph and beyond is even faster. There’s no denying that the GT500-H brings a wicked smile to the faces of anyone who either sees it speeding by, or gets the opportunity to pilot it. This is big American muscle pushed to its performance max, and it’s a rocket ship.

Again, we didn’t get to do more than beeline it straight back south on I-15 in the GT500-H, meaning there was no chance to drive it on winding roads. Rest assured, though, with that much power going to the rear wheels only, it will slide. In inexperienced hands, let’s just say that Hertz seems to be putting an awful lot of faith in the renter’s driving capability. Executives seem to be unfazed by the challenge. Smith did say that similar to the program Hertz has with the 100,000 Teslas and 65,000 Polestars it’s purchasing, customers will be required to go through a sort of digital training journey before they rent the GT-H and GT500-H so that they grasp just how much power they’ll be handling.

At the end of the day, getting into a Shelby Mustang GT500-H is not a bad way to spend an afternoon – provided you have $399-per-day to spend, don’t need to go more than 70 miles and just happen to be visiting one of the limited rental locations that include Las Vegas, Phoenix and four cities in Florida. Those are obviously all vacation spots, so it seems clear the Hertz Shelby Mustangs are envisioned as a thrilling part of a trip rather than just your transportation during it. There’s no denying that both will bring a memorable experience to renters from across the country.